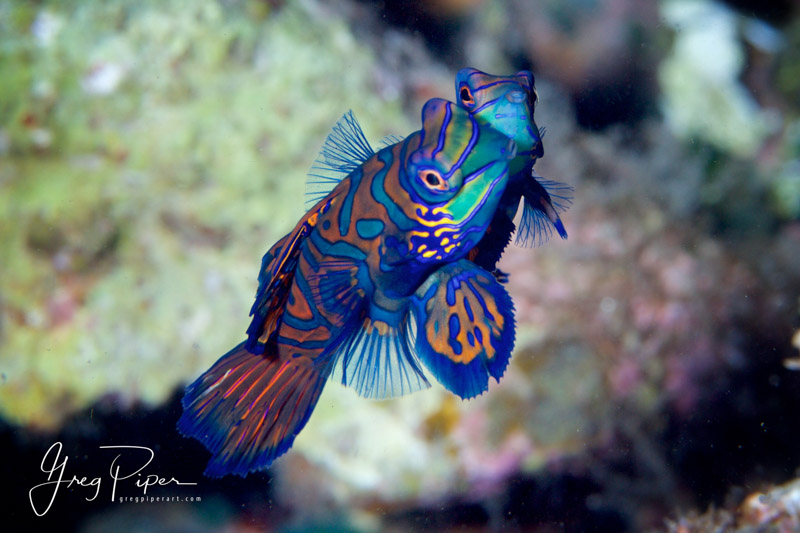 The Mandarin Fish, scientifically known as Synchiropus Splendidus, is one of the most fascinating fish in our oceans. Distinctly patterned and vivid, the Mandarin Fish may be the most ornate fish you will encounter while diving. Its beauty and distinctive mating habits make the Mandarin Fish an extremely popular photographic subject. However, its small size and skittish behavior make it extremely difficult to photograph. Although on occasion you can find these animals during the daytime, they mostly appear at dusk, rapidly moving in and out of frame until their mating ritual begins. Just before the sun sets, 3 to 5 females will make their way to a particular region of the reef and gather where males often visit and display courtship behavior to attract females. Competition among male Mandarin Fish is high, since there are only a small number of active females in a group. A successful male, usually the largest and strongest of the group, is joined by a female that will rest on his pelvic fin. The male and female will align themselves belly-to-belly and together, slowly rise about 3 feet above the reef. Once they are at the peak of their ascent, they will release sperm, a cloud of up to 200 eggs and almost instantly disappear. Want to see this behavior for yourself? It can be seen throughout the Indo-Pacific region, I have found Dumaguete, Philippines to be the best in the world. My most successful photographic results of Mandarin Fish have occurred at this particular site. I have shot as many as 7 pairs of mating Mandarin Fish in a single dive. The best dive operation I have found for this is Atlantis Dive Resort in Dauin. This well-appointed seaside paradise has its’ dive operation perfected with small groups (max of 6 divers) modern dive boats and allowing only one boat permitted on the site each day. This combination aids the likelihood of success in capturing these often skittish animals. Wherever you decide to discover these beautiful creatures please remember to do so responsibly. Do not touch the animal, do not disturb its habitat and never touch the coral. Be responsible and remember, the health of our oceans, the preservation of the marine habitat, should always be put before capturing any photograph! Welcome to the Philippines, Welcome to the Silence.